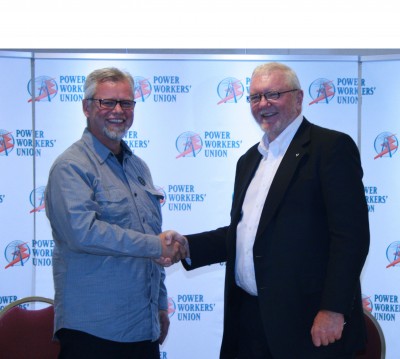 A merger between CUPE Local One and the Power Workers’ Union (PWU) is now final. CUPE Local One Members at Toronto Hydro and Cogeco Peer 1 Communications, voted with 92% approval to merge into the Power Workers’ Union on Thursday, September 15, 2016. The PWU finalized its endorsement of the merger at the 2016 Council of Chief Stewards with unanimous approval. Finally, the merger was given CUPE National assent on October 6, 2016.

This merger will provide a stronger voice for all electricity sector workers in this province and beyond. We know that decisions like the one made by CUPE Local One members and their leadership can be incredibly difficult but they have spoken in overwhelming solidarity. We admire the resolve they have demonstrated so clearly and look forward to working together to build a safer, more secure future for all of Ontario’s electricity workers.
Don MacKinnon, President of the Power Workers’ Union

CUPE Local One felt that they would be in a stronger position to deal with some of their issues within the PWU. The main issue facing the Union was contracting out. In recent years managements’ inclination has been to turn towards the use of contractors and consultants rather than backfill full time jobs. The leadership recommended that CUPE Local One members vote to merge with the PWU to put the Membership in the strongest and most secure position possible for the future.

Another issue confronting CUPE Local One’s Membership is the recent increase in the consolidation of municipal utilities and the certitude that this trend will continue in the future. One such application in front of the Ontario Energy Board has been made on behalf of; Enersource Hydro Mississauga Inc., Horizon Utilities Corporation, and PowerStream Inc.; for its approval to allow these three utilities to amalgamate. The application also requests approval for the newly merged distribution company to purchase and absorb Hydro One Brampton Networks Inc. The employees affected by the merger are largely members of the PWU and the IBEW. CUPE Local One’s leadership and their Membership chose to get ahead of the distribution companies’ developing agendas by making it clear that their overwhelming preference for their future is the Power Workers’ Union.

John Camilleri, CUPE Local One President said, “We have much in common with PWU members across Ontario and we will work hard to make the PWU, which is already by far the largest and most powerful union in the electricity sector, even stronger.”

All content contained within this website is copyright 2019 Power Workers’ Union and cannot be reproduced in print or digital without prior written consent from Power Workers’ Union. Please contact communications@pwu.ca for content usage rights.
Font Resize
Contrast
Accessibility by WAH