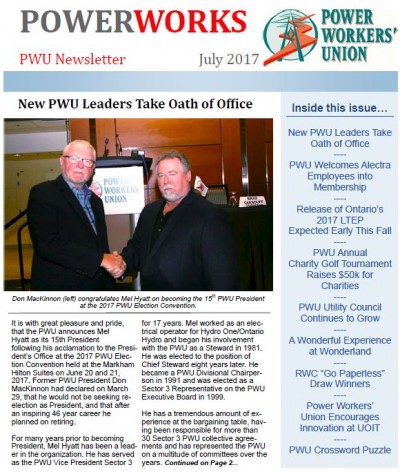 It is with great pleasure and pride, that the PWU announces Mel Hyatt as its fifteenth President following his acclamation to the President’s Office at the 2017 PWU Election Convention held at the Markham Hilton Suites on June 20 and 21, 2017. Former PWU President Don MacKinnon had declared on March 29, that he would not be seeking re-election as President, and that after an inspiring 46 year career he planned on retirement.

For many years prior to becoming President, Mel Hyatt has been a leader in the organization. He has served as the PWU Vice President Sector 3 for seventeen years. Mel worked as an electrical operator for Hydro One/Ontario Hydro and began his involvement with the PWU as a Steward in 1981. He was elected to the position of Chief Steward eight years later. He became a PWU Divisional Chairperson in 1991 and was elected as a Sector 3 Representative on the PWU Executive Board in 1999. He has a tremendous amount of experience at the bargaining table, having been responsible for more than 30 Sector 3 PWU collective agreements and has represented the PWU on a multitude of committees over the years.

Long-serving Chief Steward for Unit 3-4 at Hydro One, and Sector 3 Representative on the PWU Executive Board, Tom Chessell, was acclaimed as PWU Vice President Sector 3. Tom is a powerline technician by trade.

The position of PWU Vice President Sector 1 was contested at the Election Convention following an announcement from Bob Walker that he would not be seeking re-election. Andrew Clunis, Sector 1 Representative on the Executive Board and Chief Steward for Unit 1-22 at OPG and Jordan Rock, long-serving Chief Steward for Unit 1-9 at OPG and former Executive Board Representative Sector 1, accepted their nominations and stood as candidates for the position.  Each outlined their detailed election platforms in their speeches to the election convention delegates. The candidates also responded to all of the questions asked during the ensuing question period. In total, 90 delegates representing the PWU Members from 26 Sector 1 Units, were in attendance to interact with the candidates, listen to the speeches, ask questions and cast their votes.
On the morning of June 21st, Andrew Clunis was elected to the Office of PWU Vice President Sector 1. Andrew previously served as an Emergency Response Maintainer at OPG’s Darlington Station.