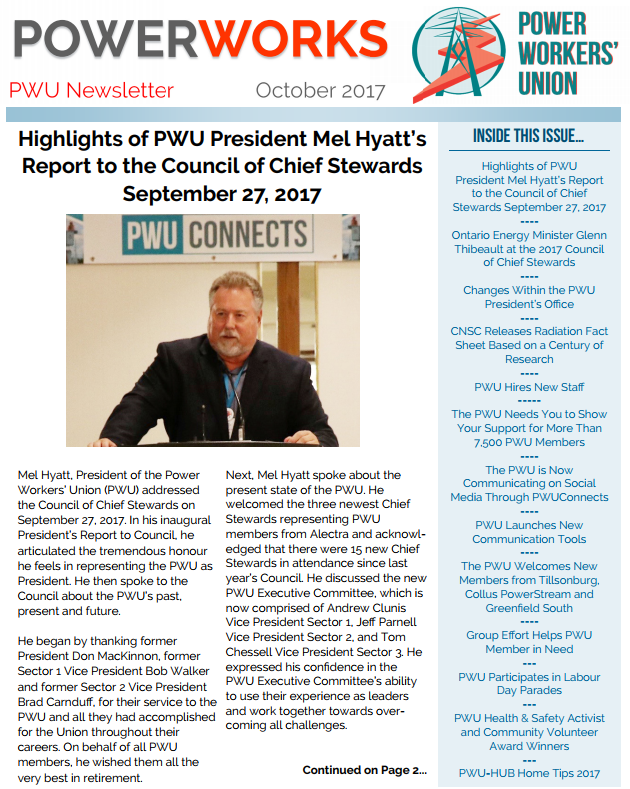 Mel Hyatt, President of the Power Workers’ Union (PWU) addressed the Council of Chief Stewards on September 27, 2017. In his inaugural President’s Report to Council, he articulated the tremendous honour he feels in representing the PWU as President. He then spoke to the Council about the PWU’s past, present and future.

He began by thanking former President Don MacKinnon, former Sector 1 Vice President Bob Walker and former Sector 2 Vice President Brad Carnduff, for their service to the PWU and all they had accomplished for the Union throughout their careers. On behalf of all PWU members, he wished them all the very best in retirement.

Mel Hyatt then reported that the PWU has recently experienced some tremendous successes:

He explained that the PWU Staff resources have grown in balance with the influx of new PWU members who now work in 60 separate bargaining units.

Mel Hyatt’s report then shifted to the future. He described the work and resources that have gone into advising the current Ontario government on the best options for Ontario’s Long-Term Energy Plan (LTEP) which is expected to be released any day now.

The PWU anticipates Ontario’s LTEP will lean heavily on nuclear generation, committing to the complete refurbishment of the Bruce Power and OPG Darlington stations, as well as continued operations at OPG Pickering through to 2024. He also explained that more Local Distribution Company (LDC) mergers are on the horizon. A representation vote is scheduled on October 19, 2017 for Energy+, a merger of Brant County Power Inc., Cambridge and North Dumfries Hydro Inc. A similar situation exists in Durham region with Whitby Hydro Energy Corporation and Veridian Corporation having taken steps towards consolidating the two utilities.

PWU President Mel Hyatt then spoke of the bargaining that the PWU will be engaged in throughout the coming year. Ontario’s five largest electricity sector bargaining units, Bruce Power, Hydro One, OPG, Alectra and Toronto Hydro are all scheduled to commence collective bargaining before the end of March 2018.

The President concluded his report with a sincere thank-you to all of the PWU’s representatives for the meaningful work they do.