Extending the Operation of Pickering GS 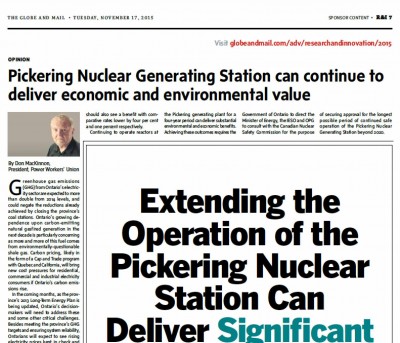 Greenhouse gas emissions (GHG) from Ontario’s electricity sector are expected to more than double from 2014 levels, and could negate the reductions already achieved by closing the province’s coal stations. Ontario’s growing dependence upon carbon-emitting natural gas-fired generation in the next decade is particularly concerning as more and more of this fuel comes from environmentally-questionable shale gas. Carbon pricing, likely in the form of a Cap and Trade program with Quebec and California, will bring new cost pressures for residential, commercial and industrial electricity consumers if Ontario’s carbon emissions rise.

In the coming months, as the province’s 2013 Long-Term Energy Plan is being updated, Ontario’s decision makers will need to address these and some other critical challenges. Besides meeting the province’s GHG targets and ensuring system reliability, Ontarians will expect to see rising electricity prices kept in check and a healthy and expanding economy that sustains existing jobs and creates new ones.
Ontario’s Independent Electricity System Operator (IESO) has identified a 2,000 to 3,000 megawatt shortfall in reliability reserve capacity resulting from the scheduled closure of the 3,100 megawatt Pickering Nuclear Generating Station in 2020 that will persist beyond 2032. As part of an interconnected power system, Ontario must fill this shortfall to comply with the reliability requirements of the North American Electricity Reliability Corporation and the Northeast Power Coordinating Council Inc.

A recent analysis by Strategic Policy Economics (Strapolec) demonstrates that extending the operation of the Pickering Nuclear Station for four years is a near-term, low-cost option that can help address all of these challenges. Moreover, this option keeps more dollars in Ontario while significantly improving the province’s energy security.

The Strapolec analysis demonstrates that continuing operations at the Pickering Nuclear Station will displace natural gas generation helping to avoid over 18 million tonnes of GHG emissions over a four-year period. That’s the equivalent of taking about 3 million vehicles off the road. Without the continued operation of Pickering,
Strapolec predicts Ontario’s increased reliance on natural gas-fired generation will increase the overall consumption of natural gas in Ontario by 25 percent.

In addition to producing electricity, Ontario uses natural gas for heating and industrial applications. Over 99 percent of this natural gas is imported, which exposes Ontarians to significant natural gas price volatility. President
Obama’s Clean Energy Plan, which is causing a major shift in U.S. dependency on coal generation to natural gas, can be expected to exacerbate this volatility.

Overall, Strapolec modeling shows $7 billion in net new economic benefit to Ontario and 40,000 additional person years of employment. By continuing the operation of the Pickering Nuclear Station, Ontario, saves $4 billion from avoided energy imports. Durham Region, where Ontario Power Generation (OPG) is the largest employer, retains $1.2 billion of economic activity. The Government of Ontario could realize over $1.1 billion in additional revenues from an increase in GDP and cost savings at OPG.

Strapolec suggests that Ontario’s industrial and residential ratepayers should also see a benefit with comparative rates lower by four percent and one percent respectively.

Continuing to operate reactors at the Pickering generating plant for a four-year period can deliver substantial environmental and economic benefits. Achieving these outcomes requires the Government of Ontario to direct the Minister of Energy, the IESO and OPG to consult with the Canadian Nuclear Safety Commission for the purpose of securing approval for the longest possible period of continued safe operation of the Pickering Nuclear Generating Station beyond 2020.