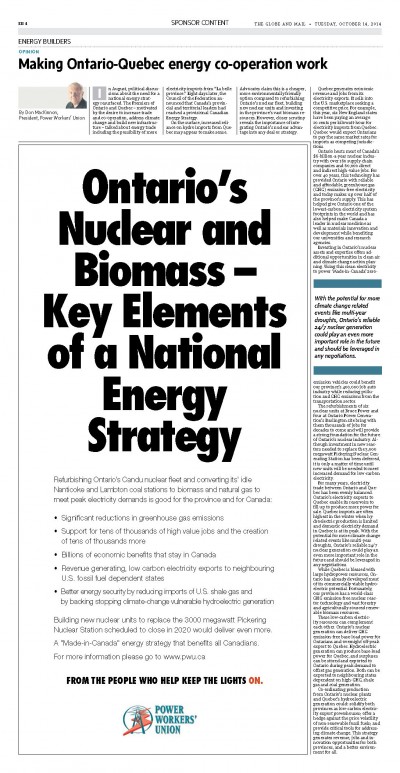 In August, political discussions about the need for a national energy strategy resurfaced.  The Premiers of Ontario and Quebec ― motivated by the desire to increase trade and cooperation, address climate change and build new infrastructure ― talked about energy trade including the possibility of more electricity imports from “La belle province”. Eight days later the Council of the Federation announced that Canada’s provincial and territorial leaders had reached a provisional Canadian Energy Strategy.

On the surface, increased reliance on hydro imports from Quebec may appear to make sense.  Advocates claim this is a cheaper, more environmentally friendly option compared to refurbishing Ontario’s nuclear fleet, building new nuclear units and investing in the province’s vast biomass resources.  However, closer scrutiny reveals the importance of integrating Ontario’s nuclear advantage into any deal or strategy.

Quebec generates economic revenue and jobs from its electricity exports. It sells into the U.S. marketplace seeking a competitive price.  For example, this year, six New England states have been paying an average 10 cents per kilowatt-hour for electricity imports from Quebec.  Quebec would expect Ontarians to pay the same market rates for imports as competing jurisdictions.

Ontario hosts most of Canada’s $6-billion-a-year nuclear industry with over 160 supply chain companies and 60,000 direct and indirect high-value jobs. For over forty years, this technology has provided Ontario with reliable and affordable, greenhouse gas (GHG) emission-free electricity and today makes up over half of the province’s supply.  This has helped give Ontario one of the lowest-carbon electricity system footprints in the world and has also helped make Canada a leader in nuclear medicine as well as materials innovation and development while benefiting our universities and research agencies.

The refurbishments of six nuclear units at Bruce Power and four at Ontario Power Generation’s Darlington site bring with them thousands of jobs for decades to come and will provide a strong foundation for the future of Ontario’s nuclear industry. Although investment in new reactors needed to replace the 3,000 megawatt Pickering Nuclear Generating Station has been deferred, it is only a matter of time until new units will be needed to meet increased demand for low-carbon electricity.

For many years electricity trade between Ontario and Quebec has been evenly balanced.  Ontario’s electricity exports to Quebec enable its reservoirs to fill up to produce more power for sale. Quebec imports are often highest in the winter when hydroelectric production is limited and domestic electricity demand in Quebec is at its peak.  With the potential for more climate change related events like multi-year droughts, Ontario’s reliable 24/7 nuclear generation could play an even more important role in the future and should be leveraged in any negotiations.

While Quebec is blessed with large hydropower resources, Ontario has already developed most of its commercially viable hydroelectric potential.  Fortunately, our province has a world-class GHG emission-free nuclear reactor technology and vast forestry and agriculturally sourced renewable biomass resources.

These low-carbon electricity resources can complement each other. Ontario’s nuclear generation can deliver GHG emission-free base-load power for Ontarians and overnight off-peak export to Quebec.  Hydroelectric generation can produce base-load power for Quebec and surpluses can be stored and exported to Ontario during peak demand to offset gas generation.  Both can be exported to neighbouring states dependent on high-GHG, shale gas and coal generation.

Co-ordinating production from Ontario’s nuclear plants and Quebec’s hydroelectric generation could: solidify both provinces as low-carbon electricity export powerhouses; offer a hedge against the price volatility of non-renewable fossil fuels; and provide critical tools for addressing climate change.  This strategy generates revenue, jobs, and innovation opportunities for both provinces, and a better environment for all.