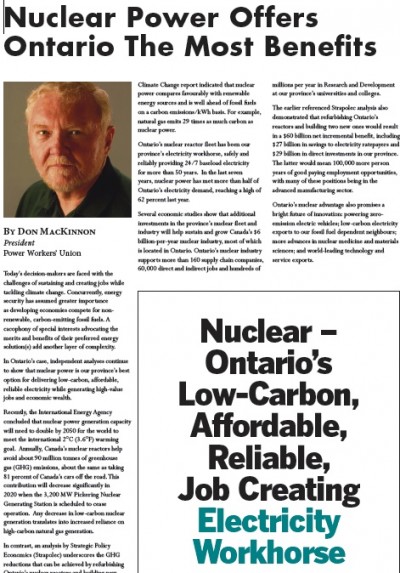 Today’s decision-makers are faced with the challenges of sustaining and creating jobs while tackling climate change.  Concurrently, energy security has assumed greater importance as developing economies compete for non-renewable, carbon-emitting fossil fuels.  A cacophony of special interests advocating the merits and benefits of their preferred energy solution(s) add another layer of complexity.

Recently, the International Energy Agency concluded that nuclear power generation capacity will need to double by 2050 for the world to meet the international 2°C (3.6°F) warming goal.   Annually, Canada’s nuclear reactors help avoid about 90 million tonnes of greenhouse gas (GHG) emissions, about the same as taking 81 percent of Canada’s cars off the road.  This contribution will decrease significantly in 2020 when the 3,200 MW Pickering Nuclear Generating Station is scheduled to cease operation.   Any decrease in low-carbon nuclear generation translates into increased reliance on high-carbon natural gas generation.

In contrast, an analysis by Strategic Policy Economics (Strapolec) underscores the GHG reductions that can be achieved by refurbishing Ontario’s nuclear reactors and building new reactors at Ontario Power Generation’s Darlington site.  These investments would reduce incremental GHG emissions after 2023 by 108 million tonnes, which represents 80 percent less emissions than continuing to build intermittent wind generation backed up by natural gas.

Opponents like to characterize nuclear power as an expensive source of electricity generation.  Expert analyses show this to be incorrect from a number of perspectives.  According to the Ontario Energy Board, the cost of electricity production in 2014 ranged from: 4.8 cents/kWh for hydroelectric, the cheapest; followed by nuclear at 6.0 cents/kWh; 12 cents for wind; 12.6 for bioenergy; 13.4 cents for natural gas (most sold at peak rates); and, solar at 48.9 cents/kWh.

While upfront costs can be high for the refurbishment or building of new nuclear reactors, expenditures can be spread out over decades of operation.  This ensures price stability, sustaining a competitive advantage for our businesses and industries.  The likelihood of some form of carbon pricing further enhances nuclear’s advantage.   A 2014 Intergovernmental Panel on Climate Change report indicated that nuclear power compares favourably with renewable energy sources and is well ahead of fossil fuels on a carbon emissions/kWh basis.  For example, natural gas emits 29 times as much carbon as nuclear power.

Ontario’s nuclear reactor fleet has been our province’s electricity workhorse, safely and reliably providing 24/7 baseload electricity for more than 50 years.   In the last seven years, nuclear power has met more than half of Ontario’s electricity demand, reaching a high of 62 percent last year.

Several economic studies show that additional investments in the province’s nuclear fleet and industry will help sustain and grow Canada’s $6 billion-per-year nuclear industry, most of which is located in Ontario.  Ontario’s nuclear industry supports more than 160 supply chain companies, 60,000 direct and indirect jobs and hundreds of millions per year in Research and Development at our province’s universities and colleges.

The earlier referenced Strapolec analysis also demonstrated that refurbishing Ontario’s reactors and building two new ones would result in a $60 billion net incremental benefit, including $27 billion in savings to electricity ratepayers and $29 billion in direct investments in our province.  The latter would mean 100,000 more person years of good paying employment opportunities, with many of these positions being in the advanced manufacturing sector.