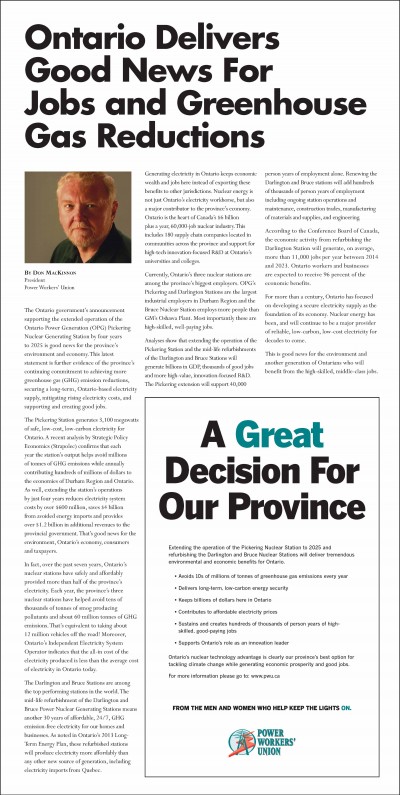 The Pickering Station generates 3,100 megawatts of safe, low-cost, low-carbon electricity for Ontario. A recent analysis by Strategic Policy
Economics (Strapolec) confirms that each year the station’s output helps avoid millions of tonnes of GHG emissions while annually contributing hundreds of millions of dollars to the economies of Durham Region and Ontario.
As well, extending the station’s operations by just four years reduces electricity system costs by over $600 million, saves $4 billion from avoided energy imports and provides over $1.2 billion in additional revenues to the provincial government. That’s good news for the environment, Ontario’s economy, consumers and taxpayers.

In fact, over the past seven years, Ontario’s nuclear stations have safely and affordably provided more than half of the province’s electricity. Each year, the province’s three nuclear stations have helped avoid tens of thousands of tonnes of smog producing pollutants and about 60 million tonnes of GHG emissions. That’s equivalent to taking about 12 million vehicles off the road! Moreover, Ontario’s Independent Electricity System Operator indicates that the all-in cost of the electricity produced is less than the average cost of electricity in Ontario today.

The Darlington and Bruce Stations are among the top performing stations in the world. The mid-life refurbishment of the Darlington and Bruce Power Nuclear Generating Stations means another 30 years of affordable, 24/7, GHG emission-free electricity for our homes and businesses. As noted in Ontario’s 2013 Long-Term Energy Plan, these refurbished stations will produce electricity more affordably than any other new source of generation, including electricity imports from Quebec.

Generating electricity in Ontario keeps economic wealth and jobs here instead of exporting these benefits to other jurisdictions. Nuclear energy is not just Ontario’s electricity workhorse, but also a major contributor to the province’s economy.
Ontario is the heart of Canada’s $6 billion plus a year, 60,000-job nuclear industry. This includes 180 supply chain companies located in communities across the province and support for high-tech innovation-focused R&D at Ontario’s universities and colleges.

Currently, Ontario’s three nuclear stations are among the province’s biggest employers. OPG’s Pickering and Darlington Stations are the largest industrial employers in Durham Region and the Bruce Nuclear Station employs more people than GM’s Oshawa Plant. Most importantly these are high-skilled, well-paying jobs.

Analyses show that extending the operation of the Pickering Station and the mid-life refurbishments of the Darlington and Bruce Stations will generate billions in GDP, thousands of good jobs and more high-value, innovation-focused R&D. The Pickering extension will support 40,000 person years of employment alone. Renewing the Darlington and Bruce stations will add hundreds of thousands of person years of employment including ongoing station operations and maintenance, construction trades, manufacturing of materials and supplies, and engineering.

According to the Conference Board of Canada, the economic activity from refurbishing the Darlington Station will generate, on average, more than 11,000 jobs per year between 2014 and 2023. Ontario workers and businesses are expected to receive 96 percent of the economic benefits.

For more than a century, Ontario has focused on developing a secure electricity supply as the foundation of its economy. Nuclear energy has been, and will continue to be a major provider of reliable, low-carbon, low-cost electricity for decades to come.

This is good news for the environment and another generation of Ontarians who will benefit from the high-skilled, middle-class jobs.