What Have Trade Unions Done For You Lately? 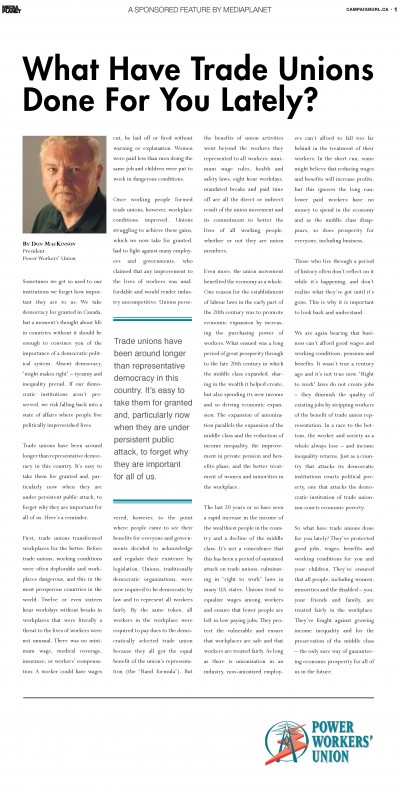 Sometimes we get so used to our institutions we forget how important they are to us. We take democracy for granted in Canada, but a moment’s thought about life in countries without it should be enough to convince you of the importance of a democratic political system. Absent democracy, “might makes right” – tyranny and inequality prevail. If our democratic institutions aren’t preserved, we risk falling back into a state of affairs where people live politically impoverished lives.

Trade unions have been around longer than representative democracy in this country. It’s easy to take them for granted and, particularly, as currently, when they are under persistent public attack, to forget why they are important for all of us. Here’s a reminder.

First, trade unions transformed workplaces for the better. Before trade unions, working conditions were often deplorable and workplaces dangerous, and this in the most prosperous countries in the world. Twelve or even sixteen hour workdays without breaks in workplaces that were literally a threat to the lives of workers were not unusual. There was no minimum wage, medical coverage, insurance, or workers’ compensation. A worker could have wages cut, be laid off or fired without warning or explanation. Women were paid less than men doing the same job and children were put to work in dangerous conditions.

Once working people formed trade unions, however, workplace conditions improved. Unions struggling to achieve these gains, which we now take for granted, had to fight against many employers and governments, who claimed that any improvement to the lives of workers was unaffordable and would render industry uncompetitive. Unions persevered, however, to the point where people came to see their benefits for everyone and governments decided to acknowledge and regulate their existence by legislation. Unions, traditionally democratic organizations, were now required to be democratic by law and to represent all workers fairly. By the same token, all workers in the workplace were required to pay dues to the democratically selected trade union because they all got the equal benefit of the union’s representation (the “Rand formula”). But the benefits of union activities went beyond the workers they represented to all workers: minimum wage rules, health and safety laws, eight hour workdays, mandated breaks and paid time off are all the direct or indirect result of the union movement and its commitment to better the lives of all working people, whether or not they are union members.

Even more, the union movement benefited the economy as a whole. One reason for the establishment of labour laws in the early part of the twentieth century was to promote economic expansion by increasing the purchasing power of workers. What ensued was a long period of great prosperity through to the late 20th century in which the middle class expanded, sharing in the wealth it helped create, but also spending its new income and so driving economic expansion. The expansion of unionization parallels the expansion of the middle class and the reduction of income inequality, the improvement in private pension and benefits plans, and the better treatment of women and minorities in the workplace.

The last 20 years or so have seen a rapid increase in the income of the wealthiest people in the country and a decline of the middle class. It’s not a coincidence that this has been a period of sustained attack on trade unions, culminating in “right to work” laws in many US states. Unions tend to equalize wages among workers and ensure that fewer people are left in low paying jobs. They protect the vulnerable and ensure that workplaces are safe and that workers are treated fairly. As long as there is unionization in an industry, non-unionized employers can’t afford to fall too far behind in the treatment of their workers. In the short run, some might believe that reducing wages and benefits will increase profits, but this ignores the long run: lower paid workers have no money to spend in the economy and as the middle class disappears, so does prosperity for everyone, including business.

Those who live through a period of history often don’t reflect on it while it’s happening, and don’t realize what they’ve got until it’s gone. This is why it is important to look back and understand.
We are again hearing that business can’t afford good wages and working conditions, pensions and benefits. It wasn’t true a century ago and it’s not true now. “Right to work” laws do not create jobs – they diminish the quality of existing jobs by stripping workers of the benefit of trade union representation. In a race to the bottom, the worker and society as a whole always lose – and income inequality returns. Just as a country that attacks its democratic institutions courts political poverty, one that attacks the democratic institution of trade unionism courts economic poverty.

So what have trade unions done for you lately? They’ve protected good jobs, wages, benefits and working conditions for you and your children. They’ve ensured that all people, including women, minorities and the disabled – you, your friends and family, are treated fairly in the workplace. They’ve fought against growing income inequality and for the preservation of the middle class – the only sure way of guaranteeing economic prosperity for all of us in the future.