Collective Bargaining Begins Between The PWU and Toronto Hydro 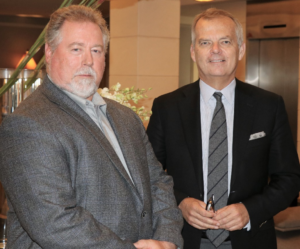 Bargaining towards a new collective agreement between the PWU and Toronto Hydro began on October 17, 2017 with representatives from each side meeting at the bargaining table for the first time.

The proceedings commenced with remarks from the leadership of each organization.

Mel Hyatt, President of the Power Workers’ Union (PWU) began by welcoming everyone to the bargaining table. He spoke of the importance of following a collective bargaining process and working towards a fair contract that helps build on the existing relationship. He expressed his confidence in the assembled representatives’ ability to work towards an agreement that benefits everyone.

Anthony Haines, President and CEO of Toronto Hydro expressed his enthusiastic outlook for the future of Toronto Hydro. He went on to explain how the municipally-owned utility operates in Ontario’s energy sector. He concluded his opening remarks by articulating his trust in both bargaining committees, to deliver an agreement that sets up future successes that everyone will share in for years to come.

The bargaining committees went on to exchange their respective bargaining agendas and finalize the upcoming meeting schedule. 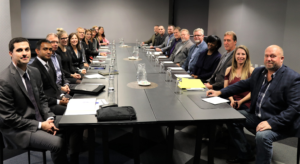 Details of the proceedings will not be shared during the collective bargaining process. However, there may be joint communications issued as key milestones are reached or to provide a general update.