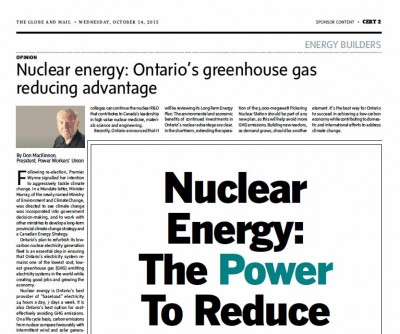 Following re-election, Premier Wynne signalled her intention to aggressively tackle climate change. In a Mandate letter, Minister Murray, of the newly named Ministry of Environment and Climate Change, was directed to see climate change was incorporated into government decision-making, and to work with other ministries to develop a long-term provincial climate change strategy and a Canadian Energy Strategy.

Ontario’s plan to refurbish its low-carbon nuclear electricity generation fleet is an essential step in ensuring that Ontario’s electricity system remains one of the lowest cost, lowest greenhouse gas (GHG) emitting electricity systems in the world while creating good jobs and growing the economy.

Nuclear energy is Ontario’s best provider of “baseload” electricity 24 hours a day, 7 days a week. It is also Ontario’s best option for cost-effectively avoiding GHG emissions. On a life cycle carbon emissions from nuclear compare favourably with intermittent wind and solar generation and are substantially less than natural gas.

Over the past seven years, Ontario’s nuclear fleet has supplied more than half of our electricity, with a station like Darlington providing about 20 percent. In each of those years Ontario’s nuclear energy has helped avoid about 60 million tonnes of GHG emissions—the same as taking approximately 12 million cars off the road. Additionally, nuclear underpins Ontario’s energy security; important for a province with limited new hydropower potential. Ontario also imports over 99% of its natural gas, a large portion of which is environmentally questionable U.S. shale gas.

According to a 2012 Canadian Manufacturers and Exporters Study, refurbishing 10 Ontario nuclear reactors is estimated to employ more than 10,000 people over the 11-year project. These investments will also sustain about 16,000 jobs at Ontario’s nuclear stations. The resulting wages and purchases of goods and services will benefit both the local host communities and provincial economy.

Ontario’s support for the refurbishment of its nuclear fleet recognizes these and future benefits. In a recent speech, Minister Murray noted the fit between nuclear energy and the overnight charging of zero-emission electric vehicles. Besides helping to sustain our struggling 400,000-job auto sector, this would tackle emissions from Ontario’s largest emitting sector: transportation.

Moreover, sustaining and growing Ontario’s nuclear energy advantage should be an integral part of any low-carbon national energy strategy. In the future, Ontario’s nuclear advantage could play a bigger role in supporting climate-vulnerable hydroelectric facilities in other provinces.

President Obama’s Clean Energy Plan will drive demand for more low-carbon electricity from Canada. As the United States reduces its dependency on carbon-emitting fossil fuels, Ontario’s nuclear advantages bode well for our province’s continuing role as an exporter of this clean energy.

In addition to generating export revenue, Ontario’s universities and colleges can continue the nuclear R&D that contributes to Canada’s leadership in high value nuclear medicine, materials science and engineering.

Recently, Ontario announced that it will be reviewing its Long-Term Energy Plan. The environmental and economic benefits of continued investments in Ontario’s nuclear advantage are clear. In the short-term, extending the operation of the 3,000-megawatt Pickering Nuclear Station should be part of any new plan, as this will help avoid more GHG emissions. Building new reactors, as demand grows, should be another element. It’s the best way for Ontario to succeed in achieving a low-carbon economy while contributing to domestic and international efforts to address climate change.